ResAvenue.com, India's largest online reservation and payment Gateway solution for the hospitality industry has expanded its netbanking facility and tied up with Central Bank of India thus adding to its reach across all major banks. ResAvenue.com has always aimed at providing its customers the best and the maximum number of payment options. 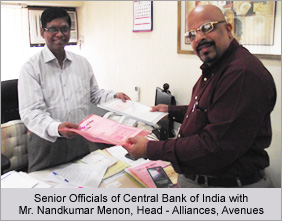 Among the Public Sector Banks, Central Bank of India can be truly described as an All India Bank, due to distribution of its large network in 27 out of 29 States as also in 3 out of 7 Union Territories in India. Central Bank of India holds a very prominent place among the Public Sector Banks on account of its network of 3967 branches and 27 extension counters at various centres throughout the length and breadth of the country.

Further in line with the guidelines from Reserve Bank of India as also the Government of India, Central Bank has been playing an increasingly active role in promoting the key thrust areas of agriculture, small scale industries as also medium and large industries. The Bank also introduced a number of Self Employment Schemes to promote employment among the educated youth.

A number of innovative and unique banking activities have been launched by Central Bank of India. Some of its pioneering services are as under:

About Avenues:
Incorporated in the year 2001, Avenues is a zero-debt company that has been profitable from its inception. Avenues is headquartered in Mumbai, India and has subsidiary companies and offices in USA, Singapore and China. Avenues has developed several innovative, cutting-edge ASP hosted solutions that are used by thousands of eMerchants globally.

Beginning as a single product company that catered to the local market, Avenues has become a multi-product company that operates on a global scale. The Avenues support and development center is based in Mumbai, India. The total strength of the Avenues team is currently 125 persons spanning across all offices.